Tackling the problem of childcare

By Helen Norman and Colette Fagan, University of Manchester

The UK has one of the highest costs for childcare in the developed world. The average household now spends £11,562 a year on their two year old’s full-time nursery fees or £15,118 a year if they live in London[1] (Harding et al. 2017). Latest figures from the Organisation for Economic and Cooperation Development (OECD) show that in the UK, the cost of full-time, pre-school childcare is now equivalent to a third of the average wage compared to less than 10% of the average wage in other countries such as Germany, France and Sweden (see Figure 1).

Figure 1: Net cost of full-time pre-school childcare as a % of average earnings, 2016 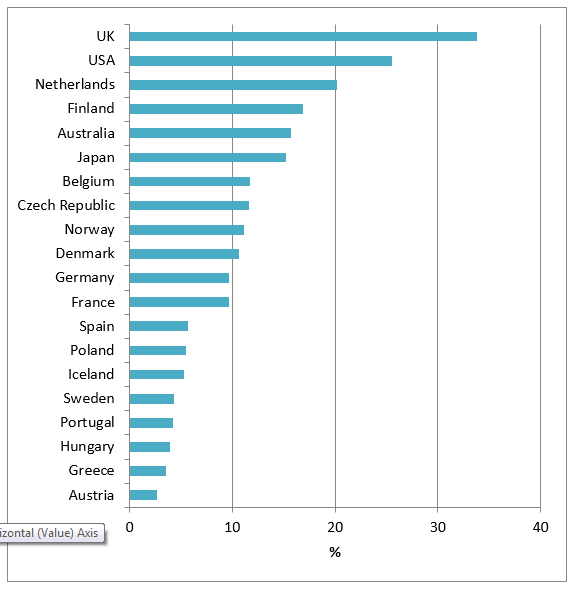 What is being done about it?

In September, free early education was doubled to 30 hours a week during term-time for all three and four year old children across England. Tax-free childcare, introduced in April, allows parents in England to open an account to save for childcare costs – for every 80p that is paid in the government tops-up the account with 20p to a maximum of £2,000 per child (or £4,000 if the child is disabled). The roll out of Universal Credit means that many low income families now benefit from having 85 per cent of their childcare costs covered. Yet problems with accessibility and affordability remain.

Why are the new initiatives not working for everyone?

The 30-hours free childcare offer recently came under fire by the Organisation for Economic and Cooperation Development (OECD) because it is targeted to employed parents (who can earn up to £100,000 each) rather than helping the most deprived families. Given each parent must earn, on average, a weekly minimum equivalent to 16 hours at the National Minimum or Living Wage, those who are not employed, on zero hours contracts or very low pay will not be eligible for this support. The UK has a high proportion of children in workless families, including lone-parent families, and these families, who need it the most, will miss out (see Weale 2017).

On top of this, the funding formula for the 30-hours offer diverts resources away from state nurseries that are disproportionately attended by disadvantaged children. So although the 30-hour offer is expected to help more parents return to the workplace, it is being implemented at the expense of high-quality early years education, which particularly benefits children from poorer families. Potentially, this could widen the education gap between advantaged and disadvantaged children before they start school (Waldfogel and Stewart 2017).

There are other concerns with the implementation of the 30-hour offer:

There are also limitations with the support provided through Universal Credit. It is not available to 60% of households because not all adults earn enough to pay tax (Hirsch and Hartfree 2013), and it can only be claimed for the first and second child. Finally, the subsidy provided through Tax-Free Childcare may just simply push up childcare prices rather than lowering the overall cost of care. Roll out of the Tax-Free scheme for older children (aged 7-12) has also been delayed until March 2018 so for this group, it will be five years since the initiative was first announced.

So where do we go from here?

Given persistent shortfalls, the following measures are needed to develop childcare provision in the UK:

1. Address the childcare gap for children aged 1 to 3. This can be achieved by:

2. Increase funding for local authorities to provide nurseries and childcare to meet demand for the 30-hour offer with employers also playing a greater role in funding childcare for working parents.

3. Quality improvements for the childcare workforce – so that all practitioners in the childcare sector are qualified to minimum Ofsted requirements (i.e. a manager at NVQ Level 3, and at least half the staff at Level 2 in each setting).

For more information about tax free childcare see our advice pages. You can also call the Working Families helpline on 0300 012 0312 for advice and information.

Fagan, C., Norman, H. (2016): ‘What makes fathers involved? An exploration of the longitudinal influence of fathers’ and mothers’ employment on father’s involvement in looking after their pre-school children in the UK’ in Crespi, I., Ruspini, E. (ed): Balancing work and family in a changing society: the father’s perspective, Palgrave MacMillan: Basingstoke

Norman, H. (2010) Involved fatherhood: An analysis of the conditions associated with paternal involvement in childcare and housework (Unpublished doctoral thesis). University of Manchester

2 responses to “Tackling the problem of childcare”